Coming off its first 3A state tournament appearance since 2014, Boulder City High School girls basketball team is looking to make a return trip.

“I feel like this team can get back to the state tournament,” head coach Lisa Foster said. “We have a super good group of young kids coming up who I expect to be big contributors. I feel pretty confident that we’ll be at the top of our regional group.”

Bringing in a solid new core, the Lady Eagles have a pair of foundation players to build around in seniors Ellie Howard and Keely Alexander.

“I told both of them over the summer that this is their ball club,” Foster said. “I told them that we expect them to play the full 32 minutes and take charge of this team. We need them to take the younger players under their wing and mentor them. Both of them have been really excited about this.”

Back for an encore as the reigning 3A player of the year, Howard averaged 17.5 points and 12.5 rebounds per game last season, while adding 1.5 blocked shots on the defensive end, proving she was the best player in the classification a season ago.

Foster said she will look for even more way to get her star center involved.

“I’ve never had a player like Ellie who has the ability to dominant the paint offensively,” Foster said. “I’ve really tried to alter a lot of my plays so we can figure out ways to get Ellie involved as much as possible and get her as many touches as we can. What’s been really cool is her unselfish attitude. She’s been more focused with getting other girls involved. Her mindset is the more others score, the more she can score.”

Returning in the backcourt, Alexander averaged 9.8 points, five rebounds, 3.5 assists and 3.1 steals per game, establishing herself as a premier ball handler and on-ball defender.

Both are expected to not only duplicate their statistical output from last season, but provide ample amount of leadership for the next wave of Lady Eagles.

“They’ve both come into the year with a team oriented attitude,” Foster said. “It’s not all about them and how many points they can score. They’re looking to get their teammates involved, seeing who they can pass the ball off to. It was exciting during the first week of practice to already watch this team grow.”

Adding much-needed depth this season will be junior Barbara Williams and freshman Miranda Williams, who are expected to play key roles this season, transferring over from 4A Foothill.

“We have a lot of young girls who have to adjust to the varsity game,” Foster said. “Having both of them coming into the program will be very beneficial for us. They bring much-needed experience with them.”

Senior Sophia Morris is also expected to play a key role as a starter this year, while juniors Alyssa Monroe and Madison Stone and sophomores Samantha Bahde and Ella Mckenzie are all fighting for valuable minutes.

Freshman Bree Leavitt will be in the mix for some playing time.

“Samantha got a few varsity minutes last year, not much, but I think she can definitely be a solid contributor for us,” Foster said. “She has a really good outside shot that we’re excited about. Ella is another player we’re excited about. She should be one of our first players off the bench to (relieve) Ellie when needed.”

Coming into the season with high expectations, the Lady Eagles will start the season off with a pair of 4A opponents, hosting Basic on Monday, Dec. 2, and Green Valley on Tuesday, Dec. 3. 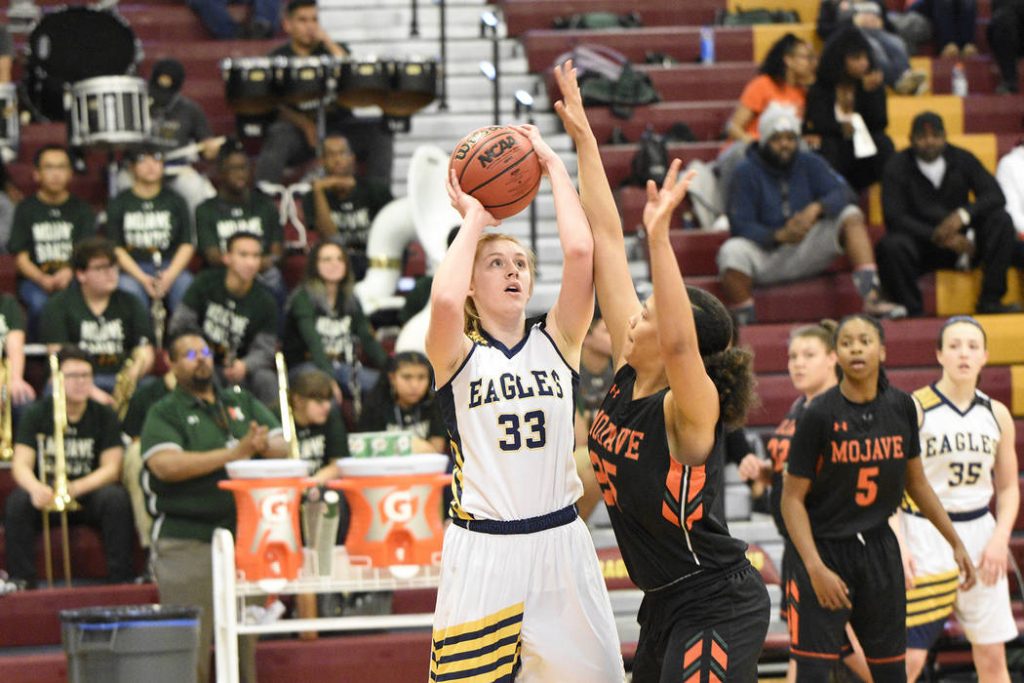