Boulder City High School’s boys basketball team lost to 4A teams Basic 69-58 on Monday, Dec. 2, and Green Valley 46-41 on Tuesday, Dec. 3, but have silver linings to fall back on.

The Eagles have played well at times in their preseason gauntlets against teams in higher classifications, and head coach John Balistere said he expects more out of this group.

“I felt a lot better about our effort tonight against Green Valley,” he said after Tuesday’s game. “We showed a lot more effort than in the Basic game. We turned the ball over too much and we’re not being fundamentally sound with the basketball to start the season. But that’s fixable. Even with our issues we remained in the game, which is nice to see. We just need to gel more together and play team basketball and that comes with time.”

Pushing the Gators to the test, the Eagles led 32-31 after three quarters before foul trouble doomed their chances of a win.

Sitting on the bench for the majority of the game, star junior Ethan Speaker finished with only 8 points due to foul trouble, leaving room for junior Matt Morton to steal the show with a game-high 21 points.

Expected to play a large role this season, Speaker broke out for 27 points, eight rebounds, three steals, two assists and a block on opening night against the Wolves, flashing his play-making ability. Even with his brilliance on the court, coach Balistere is challenging Speaker to go even further above and beyond this season to maximize his full potential.

“Ethan had a great game against Basic,” John Balistere said. “Those are the types of game we expect out of him. He’s a very skilled and talented player and every time he steps on the court he should play like that. His upside as a player is off the chart and it’s up to him to go out there every night and be aggressive, especially on the glass. He had a great game to open the season so Green Valley game planed for that and challenged him early. If he can answer those challenges and figure it out each game, he’ll do great things.”

Forming a big three for the Eagles, Morton added 14 points and nine rebounds against the Wolves and Gavin Balistere added 11 points.

“They were both great for us,” John Balistere said. “Matt is a very physical player and gives us a presence that no one else can. Gavin as well has been physical for us on the perimeter. We expect big things out of both of them, being returning starters. It’s not just points; it’s the little things as well that get unnoticed.”

Only eight quarters into the season, coach Balistere was adamant that his team needed more practice and game reps. The team will get that opportunity playing in the Lake Mead Holiday Classic, which starts today.

“This group definitely needs some practice,” John Balistere said. “We haven’t really gotten the opportunity to gel yet. This tournament will really help us try new things, figure out who’s going to be in the rotation. We’re looking to see who fits together and find an identity. I know we need to rebound the ball better; we need to take care of the ball better. Our guys are trying to learn each other. Getting more games under our belt will help solve these issues.”

The Eagles will follow up with their league opener on Tuesday at SLAM Academy. 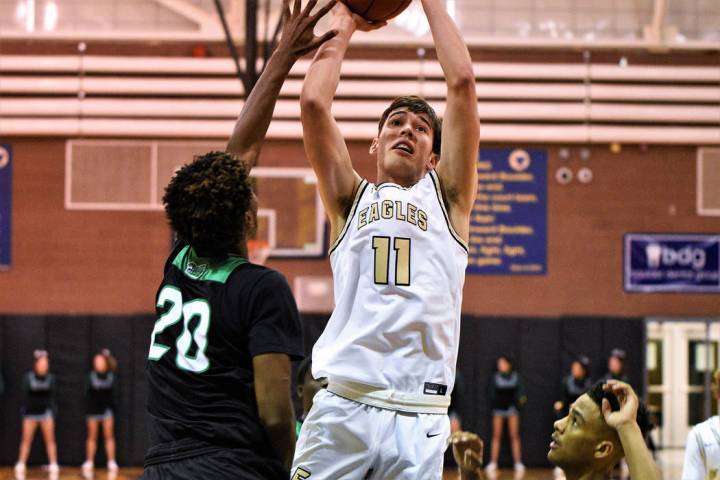